Salutations my fellow movie goers from around the globe. Disney Plus recently revealed upcoming Marvel & Star Wars related shows streaming in 2021-2022. As a fan of both franchises, I’d like to share my Top 12 Anticipated Marvel And Star Wars Shows Of 2021-2022. Why Top 12? Because I refuse to gain an extra digit from causing any bad luck.

There will be SPOILERS for “Avengers Endgame.” If you haven’t seen the final chapter of “The Infinity Saga,” watch it immediately, because this Top 12 List is a requirement.

12. The Falcon & The Winter Soldier 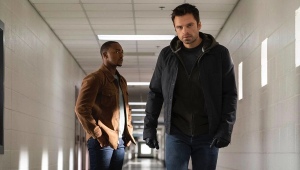 Picking up where Avengers: Endgame concluded The Infinity Saga on an epic high note, Steve Rogers/Captain America’s allies Sam Wilson/Falcon & Bucky Barnes/Winter Soldier join forces once again as they go on a globe trotting adventure to battle a terrorist organization called, “Flag-Smashers.” Sam will use Cap’s shield now that he’s taking over Steve’s duties as Captain America 2.0, I wonder what he’ll look like wearing the suit in live action format. Will just have to see. In addition to Anthony Mackie & Sebastian Stan reprising their roles as the titular duo, Daniel Brühl will reprise his role as Baron Zemo. The villain from “Captain America: Civil War.”

The upcoming mini-series will stream on March 19th, 2021. 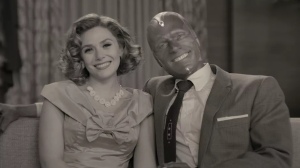 After Wanda Maximoff/Scarlet Witch is brought back to life thanks to Hulk snapping his fingers using The Infinity Gauntlet, she’s struggling to accept the fact her lover Vision was killed by Thanos. Wanda creates a simulation bubble in which Vision alive and building a reality based on sitcoms as a married couple spanning decades ranging from The 1950’s to Present Day. Meanwhile in reality, an organization investigates the bubble. Besides Elizabeth Olsen & Paul Bettany reprising their roles as Scarlet Witch & Vision, Randall Park & Kat Dennings will also reprise their roles as Jimmy Woo (Ant-Man & The Wasp) & Darcy Lewis. (first two Thor movies) Kathryn Hahn signed on to play next door neighbor Agnes. An original character exclusive to the mini-series.

WandaVision was originally slated for a 2020 release, but it got postponed due to COVID-19 pushing back to January 20, 2021 so it can be polished before deadline. Don’t forget the release date. 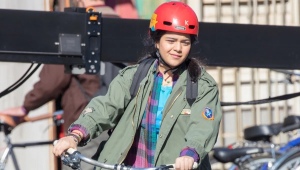 I’ll try my best to summarize Ms. Marvel’s origin story. Kamala Khan, a Pakistani-American high schooler made her debut in 2013 prior to headlining her own series stepping in her idol Carol Danvers’ (A.K.A. Captain Marvel) footsteps as Ms. Marvel, Kamala’s origin story all started when a mist gives her a vision of her Captain Marvel. Then she’s encased in a cocoon manifesting her Inhuman (not a Mutant) DNA with power to stretch and change her size much like Reed Richards/Mr. Fantastic. Thrilled with her newfound gift, she decides to become Ms. Marvel fighting crime in her New Jersey neighborhood.

Since 2014, Kamala Khan made a big impact as a positive role model for Muslim Americans earning praise from fans, critics and former U.S. President Barack Obama who’s also a fan of Marvel. He also mentioned Spider-Man is his favorite superhero. Kamala’s catchphrase, “Embiggen” was added to The Dictionary. Kamala made appearances in video games such as “Lego Marvel Superheroes 2,” “Marvel Ultimate Alliance 3: The Black Order” & Square Enix’s divisive Avengers. Like Miles Morales, Kamala has come a long way to carry her own comic book series. Her positive impact on the comic book industry encouraged Kevin Feige to produce a Disney Plus set in the MCU. Iman Vellani will portray Kamala Khan in her television debut streaming in late 2021. Iman is slated to appear in “Captain Marvel 2” scheduled for a 2022 release.

Marc Spector/Moon Knight is basically a Batman-esque vigilante dressed in a white outfit. He’s rich Good with detective skills, carries gadgets. The only between him & Bruce Wayne, is Marc uses many identities. I won’t go into full detail on Moon Knight’s origins, I’m saving it for a review based on his upcoming show. Oscar Isaac will portray the character. Right now, plot details are classified. 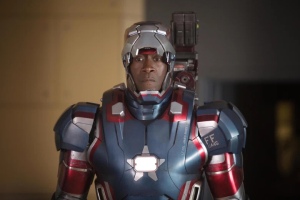 After Tony Stark’s ultimate sacrifice, his best friend Rhodey/War Machine. Loosely based on Iron Man’s storyline, Rhodey is tasked to hunt down his late friend’s technology fallen into the wrong hands. Don Cheadle will reprise his role as Rhodey. No further details have been confirmed. They are classified as of right now. 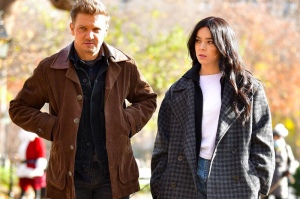 For the first time in the MCU, Clint Barton/Hawkeye finally gets his own stand-alone series. No longer the butt of jokes when it comes to headlining his own movie. Kevin Feige throws Jeremy Renner a friggin’ bone. Set after Endgame, Clint trains his eldest daughter, Kate Bishop. He trains her and embark on mission together. As of early 2021, official synopsis haven’t been confirmed. Hailee Steinfeld will portray Kate. 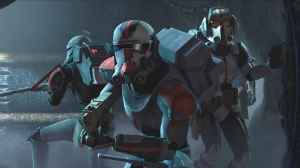 The Top 12 has entered Star Wars territory. The Bad Batch made their first appearance on the final season of “Star Wars: The Clone Wars.” A squad of clone troopers turned mercenaries led by Hunter. Set immediately after “Revenge Of The Sith,” The Galactic Republic is re-established as “The Galactic Empire.” The titular squad accept dangerous missions as they try to seek a purpose in the aftermath of The Great Jedi Purge. As of 2021, Season 1’s story arc is classified. Veteran voice actor, Dee Bradley Baker will reprise his role as Hunter & members of the squad. Ming-Na Wen will also reprise her role as Fennec Shand from “The Mandalorian.” She’s slated to appear in another Star Wars related series titled, “The Book Of Boba Fett.” 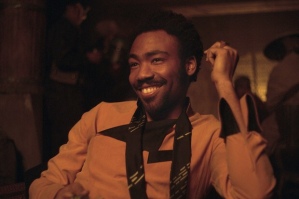 Here’s a big surprise, Disney Plus has officially green-lot a mini-series with Donald “Donny” Glover/Childish Gambino reprising his role as Lando Calrissian in a mini-series set before “The Empire Strikes Back.” Donny’s performance in “Solo” is one of the movie’s strengths as he managed to recapture Billy Dee Williams’ charismatic charm from The Original Trilogy. Plot Details are classified. I would assume the show will focus on Lando leading a double life as a businessman and smuggler in Cloud City after losing his Millennium Falcon from Han Solo. 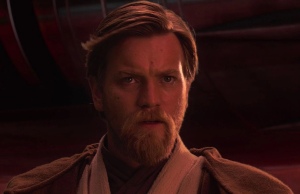 Another big reveal. Ewan McGregor is reprising his role as Obi-Wan Kenobi in a mini-series. Set before nine years before “A New Hope,” Obi-Wan continues to keep an eye on Luke in order to protect him from The Empire and Darth Vader. In addition to Ewan’s return, Hayden Christensen will reprise his role as Anakin Skywalker/Darth Vader. I’m assuming James Earl Jones signed on to voice Vader. You can’t have Vader unless you bring back James. I have a theory a flashback will show Obi-Wan & Anakin when they used to be good friends/allies prior to Anakin’s fateful turn to the dark side.

No further plot details are confirmed as of right now. Will have to see what’s in store for Obi-Wan. 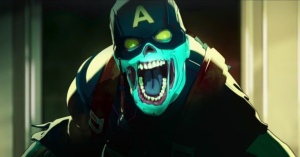 Based on titular Marvel series, What If tells out of this world stories if something outside the main timeline actually happened. For example, Peggy Carter injects the super soldier serum becoming Captain America, instead of Steve Rogers. What If will be an animated series starring Jeffery Wright as The Watcher. An alien with a massive bald head who tells the stories of our favorite characters in different roles. Many stars of the MCU such as the late Chadwick Boseman recorded their dialogue. Season 1’s 10 episodes will stream in mid-2021. 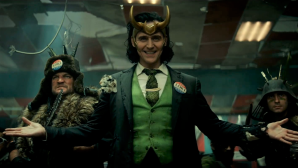 Remember that one scene from Endgame when our heroes go back in time to retrieve one of the infinity stones? After a botched attempt to get it, Loki steals The Tesseract containing a stone, teleports away. Unlike most time travel movies or shows, Endgame explains if you attempt to change the timeline, it’ll make a new timeline. Loki catches the Time Cops’ (has no further connection to Jean-Claude Van Damme) attention. Loki uses The Tesseract to evade the authorities.

Tom Hiddleston will reprise his role as Loki. Owen Wilson will portray a member of the time cops. Richard E. Grant is also in it an in unknown role. The upcoming mini-series will stream in May.

Loki is my number one anticipated Marvel related series. Can’t wait to see one of my favorite Marvel baddies headlining a mini-series.

Guardians Of The Galaxy Holiday Special

Rangers Of The New Republic 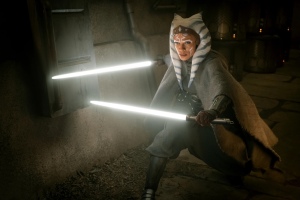 Ladies & Gentlemen, my number one pick for The Top 12 List is my favorite Jedi, Ahsoka Tano. Anakin’s former Padawan made her debut in the animated film “Star Wars: The Clones,” followed by a series focusing on her Character Development as she progresses to become an experienced Jedi as depicted in “Star Wars: Rebels” mentoring Ezra Bridger. Ahsoka finally made her live action debut in The Mandalorian’s second season portrayed by Rosario Dawson. (one of my favorite actresses) Thanks to critical praise of Rosario’s performance, an upcoming series about Ahsoka is in development. It takes place after Return Of The Jedi & the final episode of “Star Wars: Rebels.”

No release is confirmed. So they’re trying no to rush. Give each episode some time as long as Disney & Lucasfilm knows what adventures Ahsoka will embark.

That’s all I got for my Top 12 List. Which series are you looking forward to the most? Please leave a comment.