After Mission Impossible: Rogue Nation was a critical and box office success surrounding the Mission Impossible series, a sixth entry was in development with Tom Cruise scheduled to reprise his role as Ethan Hunt. As Christopher McQuarrie was writing the script, Tom kept himself busy by starring in films starting with Jack Reacher: Never Go Back, the 2017 reboot of The Mummy which is intended to reboot the first cinematic universe involving monsters known as “Universal Monsters.” Instead of Universal Monsters, it was changed to Dark Universe, as Universal Pictures somehow got away with trademark infringement, because there’s already a series titled “Dark Universe” set in the DC Universe. Last film he worked on before he came back for Mission Impossible: Fallout, was American Made directed by Doug Liman. (Mr. & Mrs. Smith, Edge Of Tomorrow)

After a three year gap of planning and developing, Mission Impossible: Fallout officially distributed in 2018.

Mission Impossible: Fallout is currently out in theaters nationwide. Critics are calling the sixth entry as the best action film since Mad Max: Fury Road.

The following review doesn’t contain no crucial SPOILERS. Feel free to read this article. Is it one of the best movies of 2018 so far? Let’s find out shall we?

Positive: Tom Cruise reprises his signature role as Ethan Hunt and he did a fantastic job for his performance. Besides co-producing and starring, he did all his own stunts without a body double. He totally deserves Bonus Points! Say what you will about him, he’s like the Jackie Chan of American Cinema. 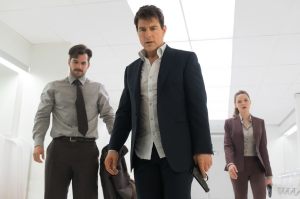 Cast Members from the previous films such as Ving Rhames, Simon Pegg, Rebecca Ferguson, Sean Harris, Alec Baldwin & Michelle Monaghan all did an amazing job for their respective performances.

Newcomers to the series including Henry Cavill, Angela Bassett & Wes Bentley all did a great job for their respective performances. Even though I often pick on Henry for his portrayal as “Emo” Superman, his role in Fallout is his best performance to date. For those who complained about Warner Bros. digitally removing his mustache for Justice League, you can finally get a grip to take him seriously.

Fun Fact: If you’re a fan of American Horror Story like me, both Angela Bassett & Wes Bentley participated in various seasons of Ryan Murphy’s FX series.

Christopher McQuarrie returns to write, co-produce and direct the latest installment of the series and did a fantastic job.

J.J. Abrams co-produced the film with the help of his production company, “Bad Robot.”

Action Sequences are brutally insane including A “HALO” jump sequence, a bike chase, a bathroom fight & The Climatic Battle. I’m giving each one an Extra Point for keeping me entertained without feeling easily bored.

Practical Effects were heavily used to coordinate dangerous stunts for Tom to endure. Especially his injury when he attempted to jump one building to another like he’s Spider-Man.

Cinematography is filled with gorgeous shots. If you watch it on IMAX, your eyes will make you go “goo goo” as in sucking your thumb like a baby craving for more.

The iconic theme song is used in certain moments.

Unlike the other movies which are primarily story driven, Fallout is a character driven tale focusing on Ethan’s duty to protect the innocent struggling to protect his team as he tries to balance both. (a la Christian Bale’s Batman)

Despite the gritty tone, jokes are often delivered in appropriate times.

Besides Ethan, his teammates serve a purpose and they weren’t incompetent. They all factor in by using their skills and abilities.

The sixth entry is filled with twists and turns I refuse to spill the beans. You are gonna have to see for yourselves.

Fallout is the grittiest film of the Mission Impossible series to date. The Stakes are escalated even further to the point of a possible nuclear holocaust, The Tone is on the same realistic level as Daniel Craig’s James Bond films combined with Christopher Nolan’s Batman.

Marketing of the film surprisingly didn’t give away crucial plot points. If you have J.J. Abrams on board, you know how the result will turn out, if you don’t count The Cloverfield Paradox.

A character goes by the code name “The White Widow.” Jeremy Renner who co-starred in Ghost Protocol & Rogue Nation, is absent in Fallout, due to a busy schedule filming Avengers 4. His character Clint Barton/Hawkeye from the MCU is allied with a spy named, Natasha Romanov who works for S.H.I.E.L.D. under the code name “Black Widow.”

Henry Cavill’s character August Walker, brings up how many times the government keeps labeling Ethan as a traitor. It’s as if the series is self-aware.

The White Widow is related to one of the characters from the first film. I’ll give you a clue, her name rhymes with “tax.”

The Syndicate from the last film continues as a key factor.

Remember that bathroom scene from the previews? It reminded me of the bathroom fight scene from True Lies with Arnold Schwarzenegger, which is also a spy film. I bet Tom and the crew were watching this to come up with heart poundin’ fight scenes.

Remember Ethan holding on to a rope attached to a helicopter from the previews? I would assume it’s a tribute to Jackie Chan’s Police Story 3: Supercop. You know the part when Jackie is hanging on to a ladder attached to helicopter? First Arnold Schwarzenegger now Jackie Chan? Tom is really passionate for action movie stars willing to take a risk by making a stunt realistic as possible.

Negative: The only thing that bothered me was Jeremy Renner’s absence. I’m not upset about him ditching this film for the upcoming Avengers 4 and was filming Tag. Sometimes a sacrifice must be made whether you’re gonna do it for fans of a certain franchise or try something different that’ll keep a fan base invested.

The Final Verdict: A, FOR APEX!

In my opinion, Mission Impossible: Fallout is another home run for Tom Cruise, Christopher McQuarrie, old and new cast members, dramatic structure etc. Proves that the series continues to improve and there’s no way it’ll slow down nor run out of gasoline. It’s as if Christopher Nolan directed a realistic take on a spy movie using tropes similar to his filmography. If you have no plans for the weekend, I strongly recommend you to see this movie. But first, make sure you rewatch the first five films before you purchase your ticket to see Mission Impossible: Fallout.

Now I actually understand why other critics absolutely loved and compared it to Mad Max: Fury Road. As a critic myself, I hear by declare Mission Impossible: Fallout, as one of my favorite films of 2018. More movies are still coming out, and I will not stop til’ I rank each film by the time 2018 comes to an end.

If you’re actually planning to watch Teen Titans Go To The Movies, I pity you.

One thought on “Mission Impossible: Fallout”