Ladies and Gentlemen and fellow movie goers alike, today’s review is about my favorite movie of all time. I present you, The Dark Knight. A sequel to Batman Begins and the second installment of Christopher Nolan’s The Dark Knight Trilogy.

After the critical and box office success of Batman Begins, Warner Bros. (WB for short) encouraged Christopher “Chris” Nolan and his brother Jonathan “Jonah” Nolan, to write a screenplay for the sequel. It took them a year of extensive research on the mythology of Batman and his biggest and nastiest adversary of all the villains he has ever encountered is, The Joker.

The casting of Heath Ledger as Joker, was controversial at the time due to his filmography, until he found fresh success with his Oscar nominated performance in Brokeback Mountain. Despite the casting controversy, Nolan believed Ledger had potential as an actor, not a male model on the cover of a GQ magazine.

After filming was completed, Post-Production began to add more elements to the project. In January 2008, Heath Ledger tragically passed away from a deadly drug combination due to complications of his inability to sleep. This caused the marketing campaign for the film to completely alter it, now involving Harvey Dent’s political campaign out of respect for Ledger.

Six months after Ledger’s untimely death, the picture earned massive critical acclaim and was a box office success, earning a grand total of $1 billion. The highest grossing movie of 2008. The film was nominated for a bunch of awards, a lot of them focusing on Ledger’s performance. He ultimately won an Academy Award for Best Supporting Actor, it was also the first time in Oscar history for an actor to earn an Academy Award for playing a comic book character. His surviving family members kept his Oscar in honor of his memory.

Besides the massive acclaim, The Dark Knight never earned an Oscar nomination for Best Picture. When I first heard about it, I was appalled because my favorite movie never made it to the nominations. As a result, The Academy decided to extend the nominations into ten. They awarded the Best Picture Award to Slumdog Millionaire instead of this one.

This article is a NON-SPOILER review just in case if you haven’t got a chance to view it.

Pros: The Opening Scene starts in a strong way, setting up a chain of events for the film. Reminds me of the opening scene from “Point Break.” Not that dreadful remake.

Newcomers to the sequel such as Aaron Eckhart as Harvey Dent/Two-Face, Eric Roberts (Emma Roberts’ daddy) as Sal Maroni, and Maggie Gyllenhaal (replaced Katie Holmes) as Rachel Dawes, did an amazing job for their respective performances.

Deebo from Friday plays an important part, ain’t gonna tell you what his role is.

Christopher Nolan did a masterful job researching the Batman mythology as well as directing and co-writing the screenplay. 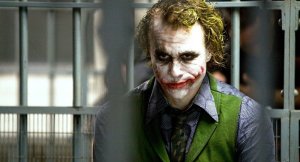 The best hands down performance goes to Heath Ledger as The Joker. His interpretation of The Clown Prince Of Gotham is inspired by Malcolm McDowell’s performance as Alex in A Clockwork Orange. One of Nolan’s favorite movies.

Fun Fact: Heath Ledger wrote a diary in character to get the energy on what makes Joker laugh such as AIDS, Exlposive Mines, and other dark subjects.

Joker’s voice sounds like Tom Waits. I would assume Mr. Ledger was a fan of his music. They worked together in Terry Gilliam’s The Imaginarium Of Doctor Parnaassus.

Character Development involving Bruce Wayne’s role as Batman as he must do whatever he can to protect the citizens of Gotham City.

Lucius Fox (who provides the gadgets for Batman like Q did for James Bond) mentions cats. Guess who shows up in The Dark Knight Rises?

Although a serious crime drama, the movie has elements of Black Comedy involving scenes with Joker.

Very well written dialogue by The Nolan Brothers, thus, labeling The Dark Knight as one of the most quotable movies.

The Best Line in my opinion is “It’s not about the money, it’s about sending a message.” I want that line to be listed as part of The American Film Institute’s “Best Movie Quotes.” I’m giving my favorite line Bonus Points, because it gave me chills!

Harvey’s signature line is, “You either die a hero, or you live long enough to see yourself become the villain.”

One character said, “I thought you were dead.” An Escape From New York reference. Mr. Nolan is a fan of John Carpenter.

The movie is unpredictable for example, A Shocking Moment involving one of the main characters. I refuse to give you the juicy details.

A Villain from the first film returns.

The Central Theme is about how evil can corrupt a good person into a pawn, a metaphor reflecting The Deal With The Devil.

Unlike villains who want to take over a city, planet, or universe, Joker’s motivation is based on a chess master who wants to use individuals into his pawns or soldiers.

Like the first installment, Practical Effects were heavily involved such as The Batmobile & The Batpod while C.G.I. was used sparingly because Nolan doesn’t like C.G.I.

The Batsuit receives an upgrade along with new gadgets. For the first time in a Batman film, we get to see Batman turning his head because previous Batsuits in other films felt claustrophobic for the actors who played him including Michael Keaton.

Batman at one point, uses retractable wings, this is a nod to Batman Beyond’s Batsuit which features wings that pop up. Gotta love a sly reference to Terry McGinnis’ suit. For those who don’t know who he is, he’s Bruce Wayne’s protégé.

Batman acquires Sonar Vision. Meaning his eyes turn white. A nod to the comics, Batman has white eyes when he wears his mask. You can tell Chris & Jonah did their homework over Batman’s mythos. Thanks to adding a unique flavor on Batman’s white eyes, this is the first time I’m watching a 100% Batman movie taking cues from the comics and even Bruce Timm’s animated series. Sonar Vision predates Detective Mode from the Arkham games.

The Cinematography was breathtaking with immersive exterior shots of Gotham City. Admit it, this makes you wanna skydive or glide like Batman.

Like the Harry Potter films, The Dark Knight parallels real life events such as the 2008 Presidential Campaign, Al Qaeda, and 9/11. Batman represents George W. Bush, the U.S. Military and Seal Six, while The Joker is based on Saddam Hussein and Osama Bin Laden. Reason why they’re similar is because Bush and the military were attempting to capture Hussein and Bin Laden.

The Climax is a Race Against The Clock scenario.

The Ending. You’re gonna have to watch this for yourself because I can’t give anything away.

During the credits, the film is dedicated to the memory of Heath Ledger. That was nice of the cast and crew dedicating a fellow colleague.

Cons: I couldn’t point out any boo boos in this picture, this means more bonus points for making a flawless gem.

The Final Verdict: A, FOR APEX!

If you haven’t seen this picture, get off your butt and buy The Dark Knight Trilogy on DVD or Blu-Ray. Trust me, you’re gonna have a fun ride with all three of them. All three films earn a massive A, FOR APEX!

I would describe The Dark Knight as The Godfather or Citizen Kane of my generation. Mr. Nolan, thank you for making this movie and your hard work paid off. I hope one day, you will earn your Oscar.

R.I.P. Heath Ledger, your performance will never be forgotten. Your legacy lives on.

One thought on “The Dark Knight”